As reported this morning by the Cleveland Jewish News, Beachwood City Councilman Mike Burkons has retained attorney Peter Pattakos to represent him in criminal proceedings filed against him last Friday by the City on a single count of interfering with the civil rights of Alix Noureddine, a Beachwood resident who serves as an assistant law director for Cleveland Heights. 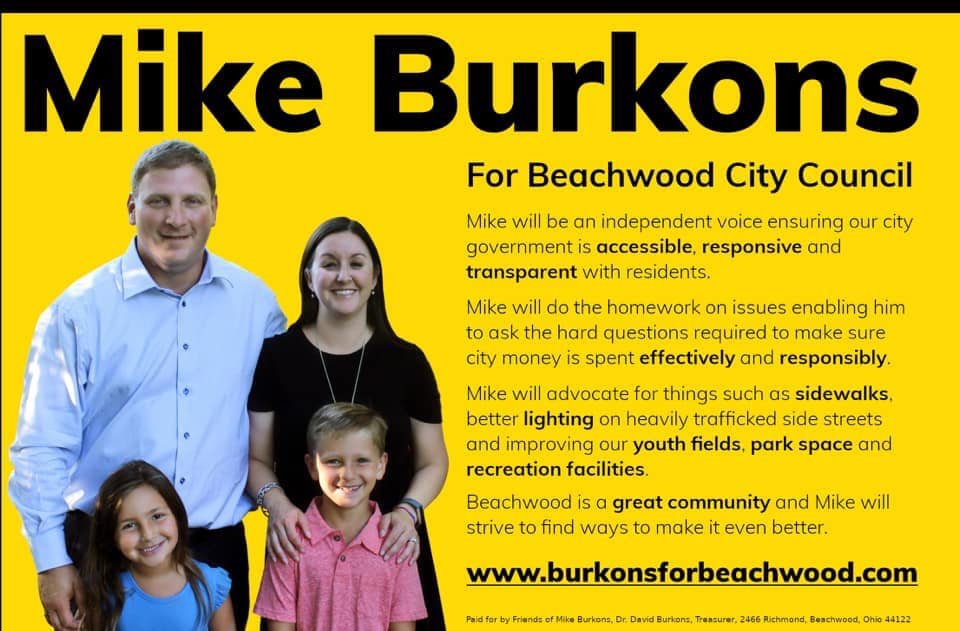 The charges arise from a suspicious request that Noureddine made to Beachwood officials on June 6, 2020, requesting an update on a complaint that was filed nearly two years earlier, in September 2018, regarding an incident that Noureddine described as an “off-duty white, male Beachwood cop harassing a young black kid.”

Burkons, who was elected to Council in November 2019, immediately investigated the matter, whereupon he discovered in the police file that Noureddine himself issued a recorded statement in 2018 in which he described the officer’s conduct—which pertained to a conversation the officer had with teenage boys who, the officer believed, had harassed his teenage daughter—as not “improper,” but “maybe inappropriate.” Noureddine also made clear—both in issuing this statement to Beachwood police, and in interacting with the off-duty Beachwood police officer at the scene of the alleged incident—that he was a Cleveland Heights prosecutor.

While troubled by Noureddine’s inconsistent statements and strange new interest in this matter nearly two years after the fact, Burkons concluded that the issue was appropriately investigated and concluded in 2018, and did not respond further to Noureddine’s request for follow-up, knowing that the Beachwood Law Director would provide Noureddine with any available information.

Noureddine, however, continued to register written complaints about this matter to Beachwood officials, including Burkons, taking issue with what he viewed as their insufficient response to his request, and accusing them of “hiding” from the issue.

At this point, Burkons emailed the Cleveland Heights City Manager and City Council members about what he viewed as Noureddine’s improper demand that Beachwood Council intervene to reopen a disciplinary matter against a police officer, for no apparent good reason, two years after the proceedings had been investigated and closed. Specifically, Burkons asked the Cleveland Heights officials how they would react to a citizen who was demanding the same of them, as any response would reflect on the merits of both Noureddine’s renewed complaint, and Beachwood Council’s response to it.

It is Burkons’ single act of having sent this email to Cleveland Heights officials that forms the basis for the City of Beachwood’s decision to charge Burkons with a crime under Ohio Revised Code section 2921.45, for allegedly having acted “under color of his office, employment, or authority,” to “knowingly deprive or attempt to deprive” Noureddine of his First Amendment right to free speech.

This decision to charge Burkons, which followed Beachwood Council’s August 17 issuance of a formal “censure” of Burkons for the same conduct, comes in the wake of controversy over the City’s mishandled investigation of a police shooting at the Beachwood Place mall in 2019. As various news reports confirm, Burkons “has been outspoken in expressing the need for transparency and release of documents and footage regarding the shooting,” and has been a leading voice for reform on these missteps that have led to  public criticism of the Law Department, including prosecutor Nathalie Supler and law director Diane Calta, and public calls for Council President James Pasch to resign. Burkons has also demanded accountability on other matters he believes to have been mishandled by Beachwood officials, including the City’s response to a public records request that led to a recent lawsuit against the City by the Cleveland Jewish News.

In a letter to Beachwood officials sent last Friday, after Burkons received notice of the charges against him, Attorney Pattakos wrote,

It is incredibly ironic, to say the least, that Beachwood officials who are now accusing Burkons of depriving a citizen of free-speech rights are doing just that to Burkons, but to an exponential degree, by—quite unlike Burkons—having actually used the influence and authority of their public offices to institute criminal proceedings against him. Even more incredibly, this irony is compounded by the fact that these Beachwood officials have taken this apparently retaliatory action in purported defense of a Cleveland Heights official—Noureddine—who complains that Burkons is somehow a criminal for doing the very same thing that Noureddine himself did to set off this whole mess: Register a complaint to a municipal government in which he is not an official about the conduct of one of that government’s officials.

Mike Burkons is doing exactly what he promised Beachwood voters that he would do if elected—use his voice to demand accountability from their local government and help Beachwood residents. His effectiveness in doing so has apparently made certain of his colleagues uncomfortable, including some who, we have reason to believe, are working with Noureddine to drive these retaliatory criminal proceedings behind the scenes.

An important point the Beachwood Law Department seems to be missing here is that Burkons has free speech rights too. As far as I can tell, there isn’t a single case in U.S. history where one public official was held liable—criminally or otherwise—for violating anyone’s, let alone another public official’s, First Amendment rights for merely having publicly expressed an opinion about that person’s conduct. If the charges against Burkons aren’t dropped soon, Beachwood officials will shortly learn what a real First-Amendment lawsuit looks like.

Burkons is also represented by attorney Rachel Hazelet of the Pattakos Law Firm. Beachwood’s charges against him are pending in the Shaker Heights Municipal Court, Case No. 20-CRB-00722, with Judge K.J. Montgomery presiding.