Yesterday, a unanimous panel of the United States Court of Appeals for the Sixth Circuit (Boggs, Clay, and White), ruled in favor of University of Toledo student, Jaycee Wamer, who alleged that school officials violated Title IX in displaying deliberate indifference to her report that she was harassed by one of her professors. 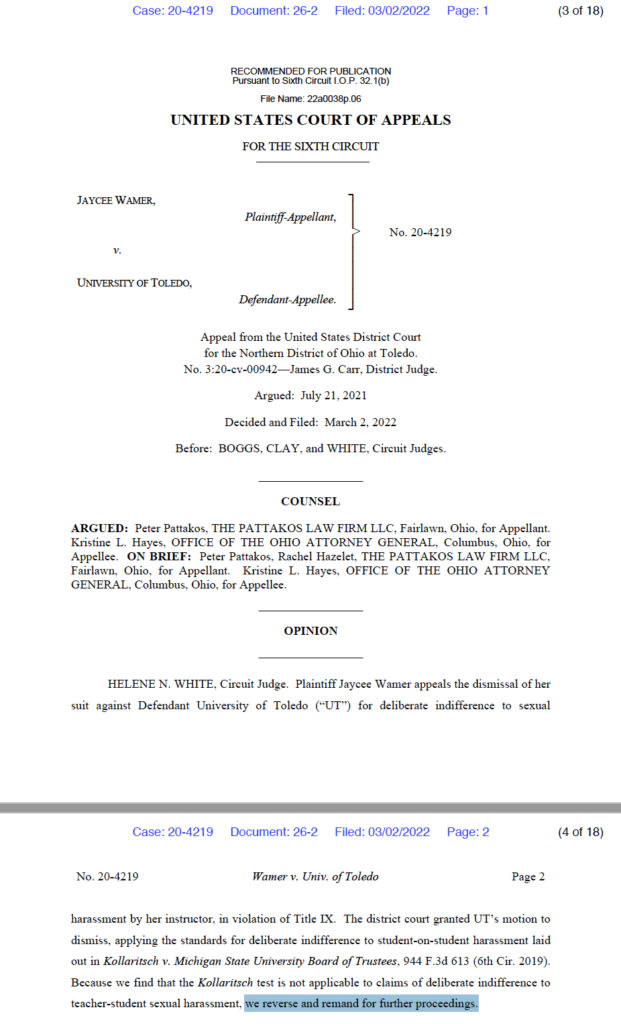 The facts alleged in the suit are set forth in the Sixth Circuit’s opinion, a copy of which is available here, and begin with the events of May 2, 2018, when “Wamer, an undergraduate Communications major, was working to complete a final project for instructor Eric Tyger’s class at UT’s Media Center when Tyger came from behind and placed his arm around her, resting it on her chest while touching her hair.” Tyger then shortly “leaned his head against Wamer, placed his hand on the middle of her thigh, and told her she smelled good, asking what kind of perfume she wore because he wanted to “buy it for [his] wife,” and then asked Wamer about her job at a state park, mentioning he had once worked there and “would go into the empty rooms to f—women.”

After Tyger continued to make sexual advances to Wamer via text messages, she, with the assistance of another professor in the communications department, reported the harassment to the University’s Title IX office.

From there, as further described in the opinion, Wamer alleged “the Title IX office … prematurely closed its investigation [of her report] after three weeks without taking any measures against her harasser, and that as a result of her fear of continued harassment she took reasonable steps, including switching majors and enrolling primarily in online classes, to avoid encountering her harasser, which undoubtedly detracted from her educational experience … [S]ix months later, when the investigation was reopened based on a third complaint by a more senior faculty member, UT found Wamer’s original allegations credible and terminated Tyger’s employment.”

Based on these allegations, the appellate court held that held that the district court erred in granting the University’s motion to dismiss the lawsuit, because “whether UT’s decision to close its first investigation after three weeks was clearly unreasonable [under Title IX] depends on what steps the University took at the time to investigate Wamer’s claims and why it decided to close the investigation without taking further action—information likely to be revealed through discovery.” Because Wamer’s allegations “[i]mpl[y] … UT did nothing (other than contacting her regarding a potential in-person interview) to investigate her allegations, or at the very least that the investigation was clearly unreasonable,” Wamer “has sufficiently stated a claim for deliberate indifference to teacher-student harassment.”

In reaching this result, the Sixth Circuit also clarified that “there are important policy reasons for imposing a less stringent standard in cases alleging teacher-student harassment.”

Having observed that it was “an open question in this circuit under what circumstances a school’s deliberate indifference to teacher-student harassment can be considered to cause discrimination,” the Court concluded that “a test similar to that articulated by the [Tenth and Eleventh Circuits] is appropriate.” To wit, that “a plaintiff can satisfy the causation requirement by showing that (1) following the school’s unreasonable response (2) (a) the plaintiff experienced an additional instance of harassment or (b) an objectively reasonable fear of further harassment caused the plaintiff to take specific reasonable actions to avoid harassment, which deprived the plaintiff of the educational opportunities available to other students.”

Thus, the Court also clarified that “given the inherent differences between peer harassment and teacher harassment recognized [by U.S. Supreme Court in Davis], and the express purpose of Title IX that no person “on the basis of sex, be excluded from participation in” or “be denied the benefits of . . . any education program or activity,” “the more stringent standard for peer-harassment deliberate-indifference claims introduced in [the Sixth Circuit’s widely cited decision in] Kollaritsch should not apply in the context of teacher-student harassment claims.”

“We are grateful for the Sixth Circuit’s recognition of the important differences between teacher-on-student versus student-on-student harassment,” said Peter Pattakos, lead attorney for Ms. Wamer. “The Court’s clarification of the different legal standards that apply to these different types of claims will help ensure that reports of sexual harassment are properly investigated and addressed by educational institutions, and that victims will have recourse to Title IX’s protections when they are not. One thing we’ve emphasized from our earliest communications with the University about this case is the importance that Title IX investigators communicate clearly with alleged victims of teacher on student harassment, including about the extent of the need for the victims’ participation in the investigation of their reports. Traumatized victims of teacher-on-student harassment should not be required to read tea leaves or read the minds of school officials to ensure that their complaints are properly handled. We remain proud of Jaycee for taking a stand to help ensure that such victims in the future will not have to suffer as she did.”