This morning, former Assistant Prosecutors Linda Herman and Laura Hoffman filed a lawsuit in the U.S. District Court for the Northern District of Ohio against Cuyahoga County Prosecutor Michael O’Malley and four of his current Assistants alleging defamation and discrimination under Ohio and federal law. The claims arise from the Prosecutor’s actions in going to the press, only a month after taking office, with a politically charged story claiming that 76 sexual-assault cases had been mishandled by the office’s juvenile division under the previous administration.

The Defendants told news reporters that Ms. Herman and Ms. Hoffman were forced to resign because they were responsible for handling “the bulk” of these cases, which, they claimed, wrongly “sat dormant on [their] desks for months and, in some cases, years.” But the Prosecutor’s office has since admitted in its submissions to the Equal Employment Opportunity Commission relating to this matter that it could only assign blame to Ms. Herman on four of the 76 allegedly mishandled cases, and to Ms. Hoffman on only two of them. 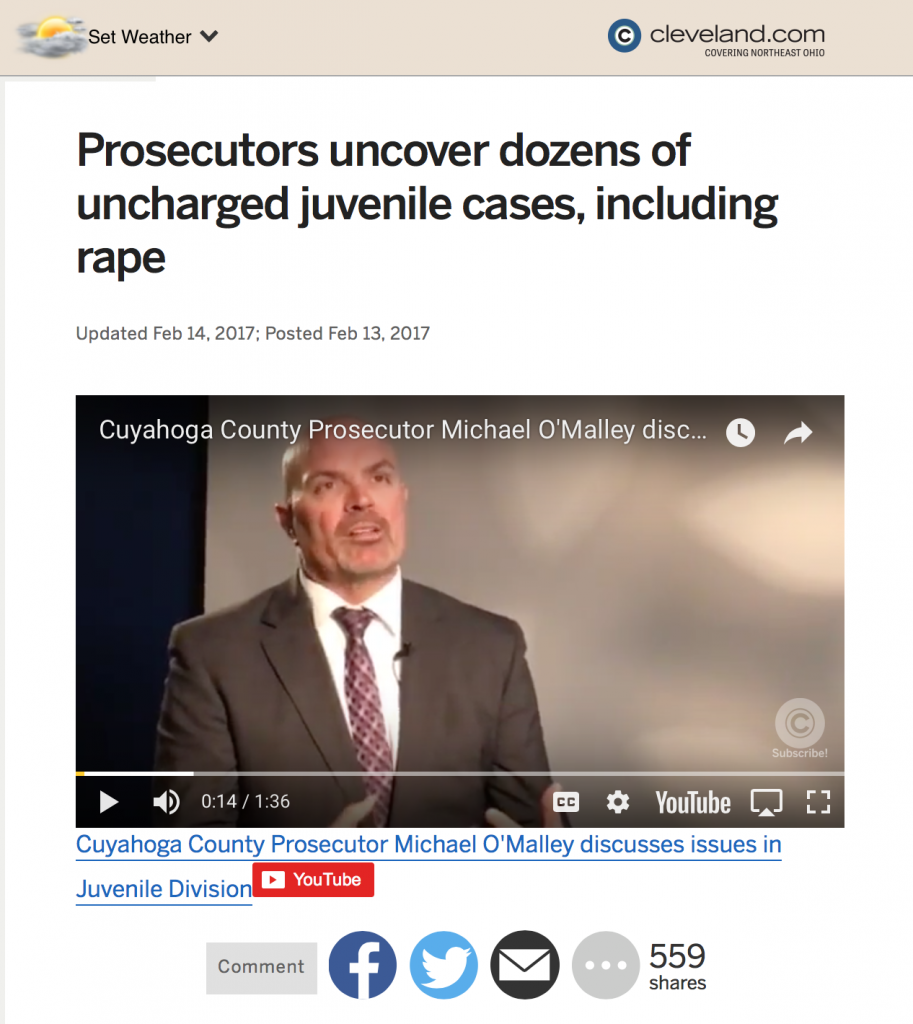 Moreover, it’s doubtful that any cases were mishandled at all. The former chief of the juvenile justice unit, Duane Deskins, has denied any such wrongdoing, maintaining that his division “did an aggressive job” of handling its case load. Beyond conclusory allegations, the public statements from the Prosecutor’s office on this story reveal little more than a reasonable difference between administrations regarding how to classify cases and allocate limited resources.

But regardless of whether these cases were actually mishandled, Ms. Herman and Ms. Hoffman were relatively inexperienced, low-level employees who followed their supervisors’ reasonable orders, and could not have been responsible for any such failure. The Ohio Department of Job and Family Services Office of Unemployment Compensation agreed, “after a review of the facts,” that both Ms. Herman and Ms. Hoffman were “discharged without just cause.”

Defendants nevertheless made Herman and Hoffman the scapegoats in this story, which was apparently manufactured to portray Prosecutor O’Malley in a better light than his predecessor Tim McGinty, and to create a pretext for the discriminatory termination of Plaintiffs’ employment.

Ms. Herman was 52 years old at the time of her termination, a 2014 law-school graduate who was approximately 20 years older than her peers in the office.

Other Assistant Prosecutors with similar experience levels as Ms. Herman and Ms. Hoffman who were just as involved in the alleged misconduct, but were younger and not disabled, were either not disciplined in any way or allowed to keep their jobs at the office.

Plaintiffs allege that they were targeted for blame in this story precisely because of their age and disability.

Neither Plaintiff had ever received a negative performance review prior to this alleged incident.

“In working on this case, it’s become clear to me that Cuyahoga County residents were lucky to have Laura Hoffman and Linda Herman working for them,” said Peter Pattakos, attorney for the Plaintiffs. “It’s all too common, in Cuyahoga County and elsewhere, for people to become casualties of politics, and those who contribute the most to a community’s diversity tend to suffer the most when this happens. Thankfully, both Ohio and federal law recognize the importance of diversity in the workplace and provide a remedy for the type of discrimination that the Plaintiffs faced here. We look forward to vindicating Laura and Linda’s rights and clearing their reputations in court.”

Ms. Herman and Ms. Hoffman are also represented by attorney Dean Williams of the Pattakos Law Firm LLC. The case is captioned Laura Hoffman, et al. v. Michael C. O’Malley, et al., Northern District of Ohio No. 1:18-cv-00309, and has been assigned to Judge Christopher A. Boyko. A copy of the complaint, which alleges claims for defamation, and discrimination under the Americans with Disabilities Act, the Age Discrimination in Employment Act, and parallel Ohio law, is available here.