On October 18, 2019, Genuine Parts Company d/b/a NAPA Auto Parts sued its former national training director Tom Rayk in the Stark County Court of Common Pleas, alleging that he was terminated by NAPA after more than 13 years with the company for having misappropriated its property and trade secrets.

To defend against these allegations, Rayk—who has been recognized in various trade publications as a “top instructor” and “world class” trainer, one of the “best aftermarket trainers” in the U.S. automotive industry, and a “corporate guru,” with “dynamic presentation skills that keeps his audience on their toes”—retained attorneys Peter Pattakos and Rachel Hazelet of the Pattakos Law Firm in Fairlawn, Ohio, and countersued NAPA for defamation, unfair competition, abuse of process, and tortious interference with business relationships based on allegations that (1) his termination was based on false accusations by NAPA employees who were seeking to cover up their own misconduct, and (2) that NAPA sued Rayk only to obtain leverage to pressure him to sign a non-compete agreement—which NAPA had requested, but did not insist on, when hiring Rayk in 2006 due to his stellar qualifications.

After conducting discovery in the Stark County lawsuit, NAPA dismissed its claims against Rayk and issued a letter on company letterhead, stating,

In October 2019, Genuine Parts Company/NAPA filed a lawsuit against Tom Rayk based on a confidential complaint against him that raised substantial concerns. Upon further investigation and discovery in this lawsuit, NAPA has decided to dismiss the lawsuit against Rayk and wishes him the best in the future. 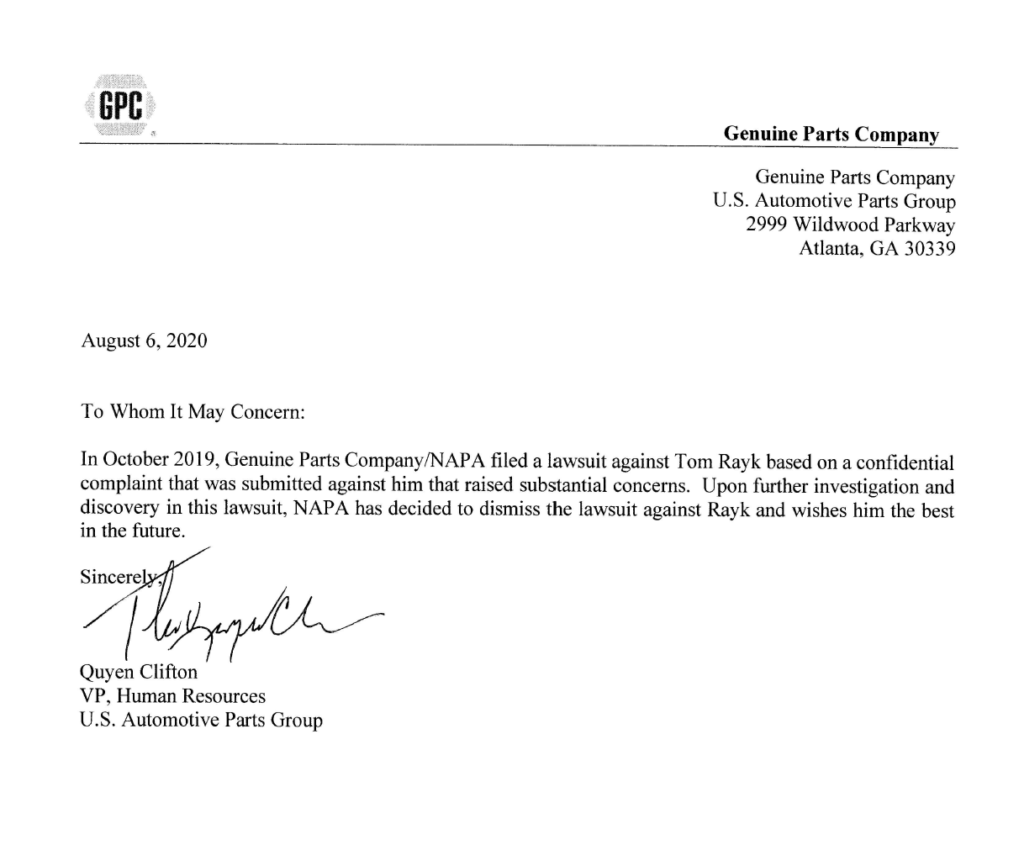 The Pattakos law firm is proud to have represented Tom Rayk and, like NAPA, wishes him the best in the future.