January 24, 2019—This morning, artist Billie Lawless sued Cleveland State University in the Federal District Court for the Northern District of Ohio to remedy the unlawful censorship of his sculpture, The Politician: A Toy, that CSU has displayed on its campus since 2008. 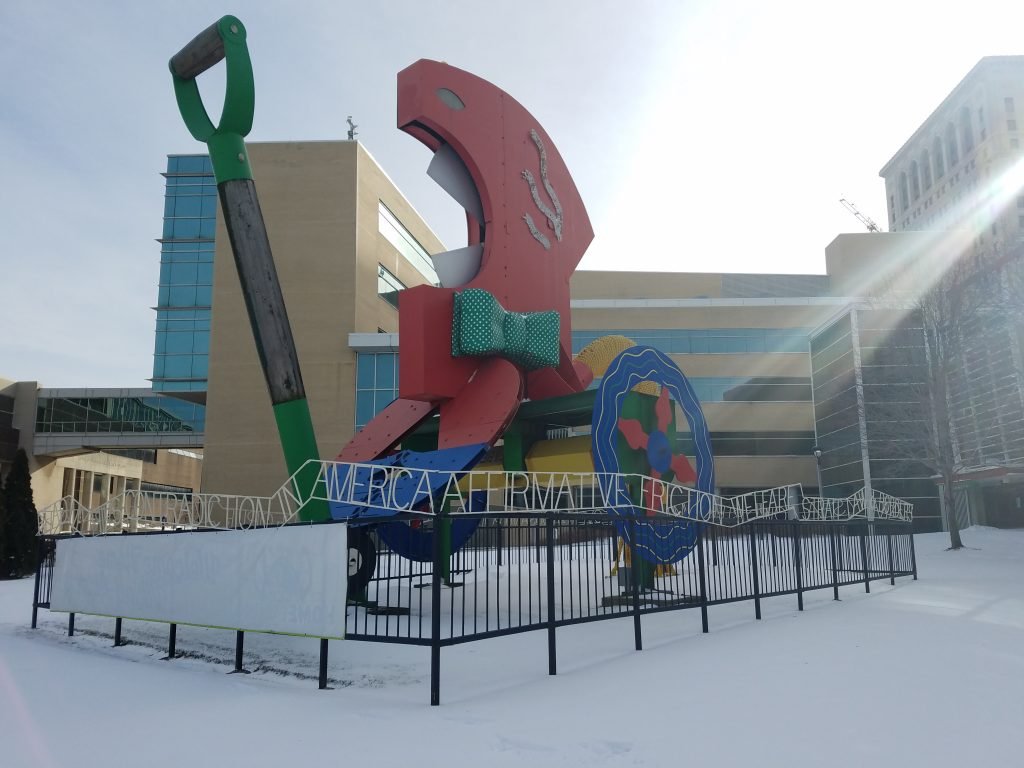 The sculpture, a forty-two-foot tall abstract figure with a motorized mouth that is continuously moving, is a criticism of the U.S. political process that is regularly updated with textual elements satirizing prominent U.S. politicians and commenting on current events. CSU invited Lawless to display the artwork on its campus after it had resided for 14 years on a private tract of land nearby where it invited the criticism of then-Mayor Michael White, who said, “I’ve seen it and I don’t like it.” In exchange for the right to display the sculpture on its property, CSU agreed that Lawless would retain all ownership and intellectual property rights in it, that the University would not “modify, disassemble or demolish the Sculpture,” and would involve and attribute Mr. Lawless in all public statements and any other actions taken regarding the artwork.

In recent years, Lawless—who in the 1980’s prevailed in the New York Supreme Court against the City of Buffalo’s efforts to remove one of his sculptures from city property—has added the phrases “OBAMA SCARE,” “LAW AND BORDERS,” and “A THOUSAND POINTS OF SLIGHT” to the sculpture, among other satirical references to famous political statements and clichés. CSU had never taken issue with any of this commentary until last October, after Lawless updated the sculpture with the phrase “BUILD A WALL OF PUSSIE”—a simultaneous reference to President Donald Trump’s campaign-promise-turned-shutdown-ultimatum to build a wall along the southern border of the United States, and his infamous use of the phrase “Grab them by the pussy” in explaining to Access Hollywood in 2005 that he “can do anything” to women because he is “a star.” CSU shortly censored the sculpture by covering the Trump reference with a vinyl banner from a homecoming event (pictured above), and in doing so violated the parties’ contract, the First Amendment rights, and the Visual Artists Rights Act. (Photos of the censored textual element are available here).

“CSU sought out Mr. Lawless to display his sculpture, and benefited not just from the artwork itself, but in the message sent to its students, faculty, and the public at large about the value of free speech in granting such a forum to an accomplished artist and social commentator,” said Lawless’s attorney Andy Geronimo. “Lawless has continuously updated the sculpture with commentary on controversial issues, and only now, in response to his timely criticism of President Trump, has CSU acted to censor it. This type of viewpoint-based discrimination clearly violates the First Amendment and also constitutes an attack on the integrity of Lawless’s artwork that’s prohibited by the Visual Artists Rights Act.”

Mr. Lawless is also represented by attorney Peter Pattakos of the Pattakos Law Firm in Fairlawn, OH. The case is captioned Lawless v. Cleveland State University, No. 1:19-cv-00178, and has been assigned to Judge Dan A. Polster. Copies of the filed complaint and motion for injunctive relief are available here and here.