Yesterday, in a 5-2 decision, the Supreme Court of Ohio ruled in favor of our clients Christina Cruz and Heidi Kaiser, affirming that “prevailing parties who were awarded reasonable attorney fees along with a punitive-damages award at trial may also recover attorney fees that they incur in successfully defending their judgment on appeal.” 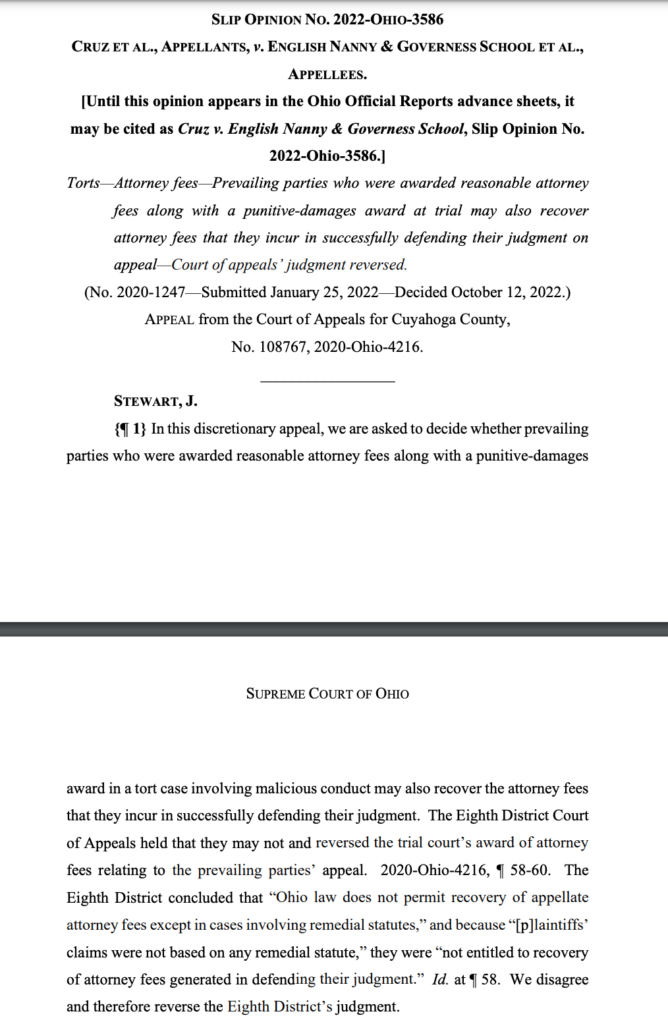 This ruling overturns a decision by the Eighth District Court of Appeals, as well as prior rulings by the Ninth and Fifth districts, holding that “Ohio law does not permit recovery of appellate attorney fees except in cases involving remedial statutes.”

As we argued in our merit brief, upholding these district-court decisions would have undermined the important purpose fee awards serve in deterring malicious tortious conduct and making victims whole. It would have granted a free pass to those found liable for such conduct at trial to delay facing responsibility for additional years of appellate review, necessarily increasing the burden to victims and disincentivizing their pursuit of relief in Ohio’s courts. The result would have been to make Ohio a safer place for those who maliciously cause harm to others, while also ensuring that those of lesser means are even more disproportionately likely to be victimized by such conduct than they already are as a result of existing inequities. And such a message would have been especially chilling in this case, which (A) arises from the owners of a (now defunct) nanny-placement agency’s retaliatory efforts to suppress and delegitimize a report by one of their nannies that she had witnessed one of the agency’s clients sexually abusing his young daughter, and (B) involved a six-week trial, after which the jury found, by “clear and convincing evidence,” that the defendants’ conduct was “extreme and outrageous,” “beyond reasonable bounds of decency,” and caused the reporting nanny to suffer “serious injury.”

Thankfully, the Supreme Court agreed that “[t]o hold that prevailing parties who were awarded punitive damages may never receive attorney fees for defending their judgments would undermine the entire purpose of awarding compensatory attorney fees for victims of defendants’ malicious or bad-faith conduct.” Additionally, the Court noted (A) that “attorney-fee awards have long been permitted at common law when punitive damages are awarded;” (B) that Ohio’s legislature has “explicitly stated that attorney-fee awards ‘shall not be considered” when determining caps on punitive damages;” and (C) that “allowing courts to determine the reasonable amount of attorney fees incurred at the appellate level when punitive damages were awarded also ensures that a prevailing party who was wronged by malicious conduct will not have to incur more expenses to defend his or her judgment on appeal.” Thus, the Court affirmed that parties may recover “reasonable attorney fees that they incur successfully defending their judgments on appeal,” a “rule [that] is consistent with the punitive-damages exception to the American rule established at common law centuries ago, is not limited by statutory caps on punitive damages, and will make the lodestar calculation more accurate.” 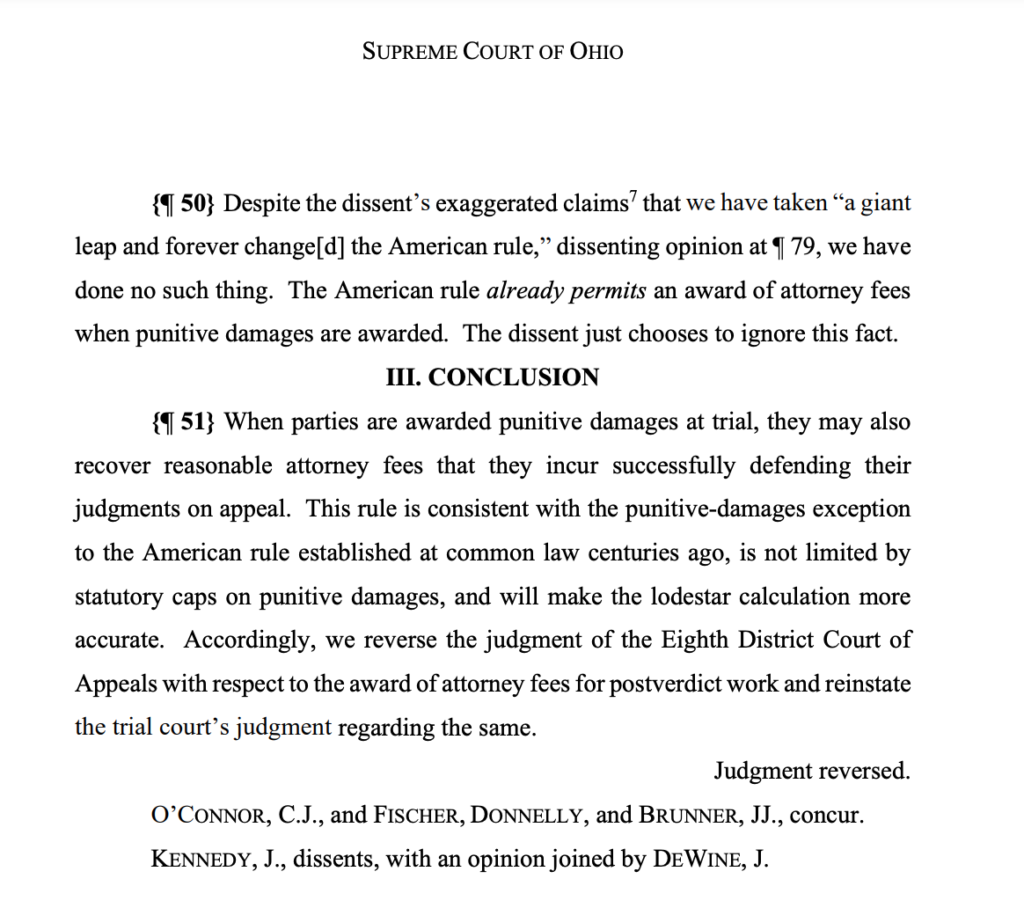 This ruling makes Ohio a less welcoming place for malicious tortfeasors, and also breathes some much-needed life into the great American tradition of the jury trial. We’re very grateful for the Court’s attention to this case, as well as the support of the Ohio Association for Justice, the Cleveland Academy of Trial Lawyers, and the Ohio Employment Lawyers’ Association, who submitted a joint amicus brief authored by attorneys Louis Grube, Calder Mellino, and John Camillus. And most of all, we’re proud of our clients Christina Cruz and Heidi Kaiser, who did the right thing under extremely difficult circumstances and fought for their rights in court against the defendants who punished them for it.

For a full copy of the Court’s ruling, click here; to access the Supreme Court’s docket for the case, including the parties’ briefing, click here; to view Court News Ohio’s report on the decision, click here; and for more articles and announcements about this case, Cruz v. English Nanny & Governess School, 2022-Ohio-3586, click here.