Why does the Plain Dealer keep publishing the Cleveland Foundation’s lies about its illegal Dunham Tavern land grab?

The front page of today’s Plain Dealer (and Advance Ohio’s sister publication Cleveland.com) contains a nauseating piece of Cleveland Foundation propaganda attempting to defend the organization’s unlawful and deplorable scheme to put a private real estate development on top of historic greenspace that was recently reclaimed by charitable donations to the Dunham Tavern Museum intended to preserve the land for the public’s enjoyment. 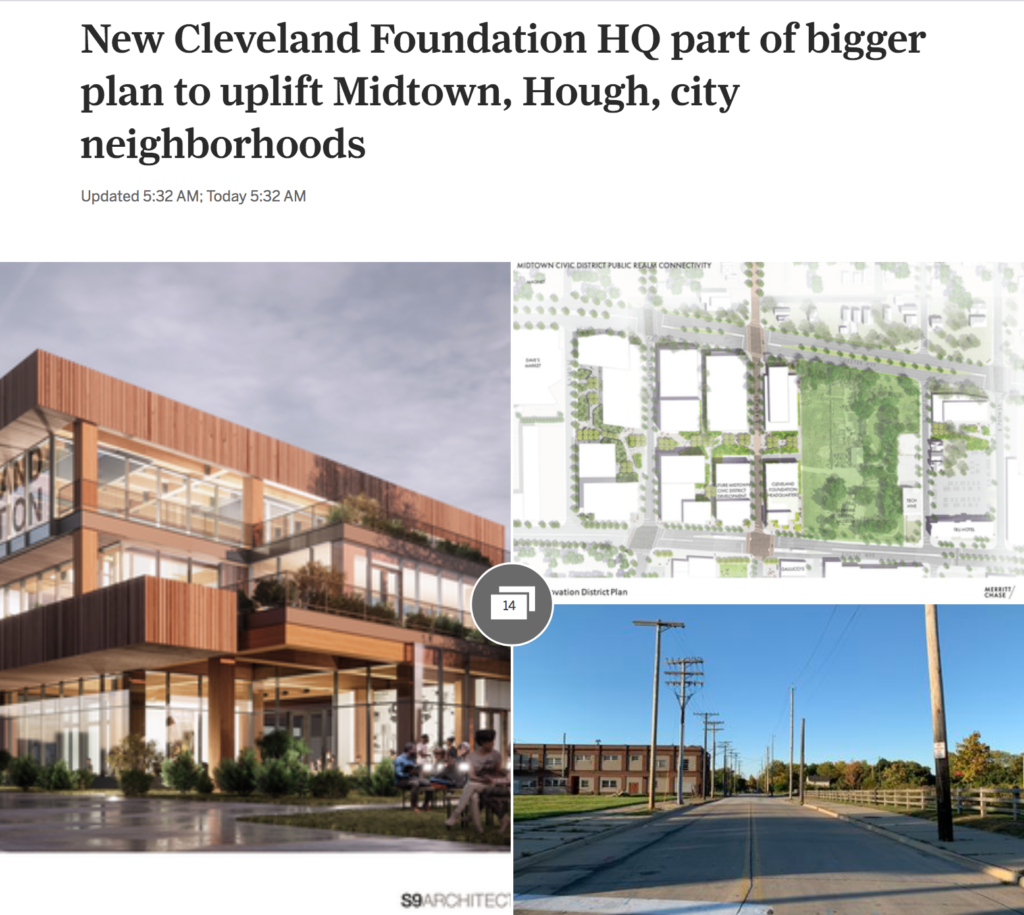 On top of the usual nonsense—like the idea that this most recent of countless hyped tax-abated development projects is going to be the one to “reverse decades of damage caused by redlining and disinvestment” in Cleveland—the PD story, titled “New Cleveland Foundation HQ part of bigger plan to uplift Midtown, Hough, city neighborhoods,” repeats and amplifies the lie that the Dunham Tavern was so “mired in debt” that it couldn’t develop the greenspace into parkland as it had promised its donors and the public that it would.

Had journalist Steven Litt, who authored this piece, cared to subject this claim to the least bit of scrutiny, he would have reported that the Dunham Tavern never suggested to its reliable donor base that it lacked the funds to follow through on the greenspace development, because a block of the organization’s conflicted board members were already intent on proceeding with the Cleveland Foundation sale.

In fact, as Litt omits from his story, since the public learned of the plans to sell the greenspace, Dunham Tavern Museum members have made repeated offers to provide funds to the organization to keep this sale from moving forward and to further the greenspace restoration, which have been ignored.

Litt’s reporting further omits the fact that upon learning of the proposed sale, twenty-six of the “most heavily invested” DTM members wrote a letter to the board in which they, (1) decry the board’s “reprehensible” actions in undertaking the “secret negotiations,” (2) recount the “extraordinary volunteer efforts” that went into the “crowning achievement” of “reclaiming most of the Dunham’s original holdings” to “place the Tavern in an historic context, and welcome the community to the original farm-like setting,” (3) confirm that it was “never [their] intention to see commercial development return to the site,” (4) note the “permanent injury to the iconic landmark of the City of Cleveland,” and (5) “pledge to halt future financial support for the organization,” including to “initiate removal of the Dunham Tavern Museum from [their] estate planning” such that “multiple millions of dollars” in donations would be lost. 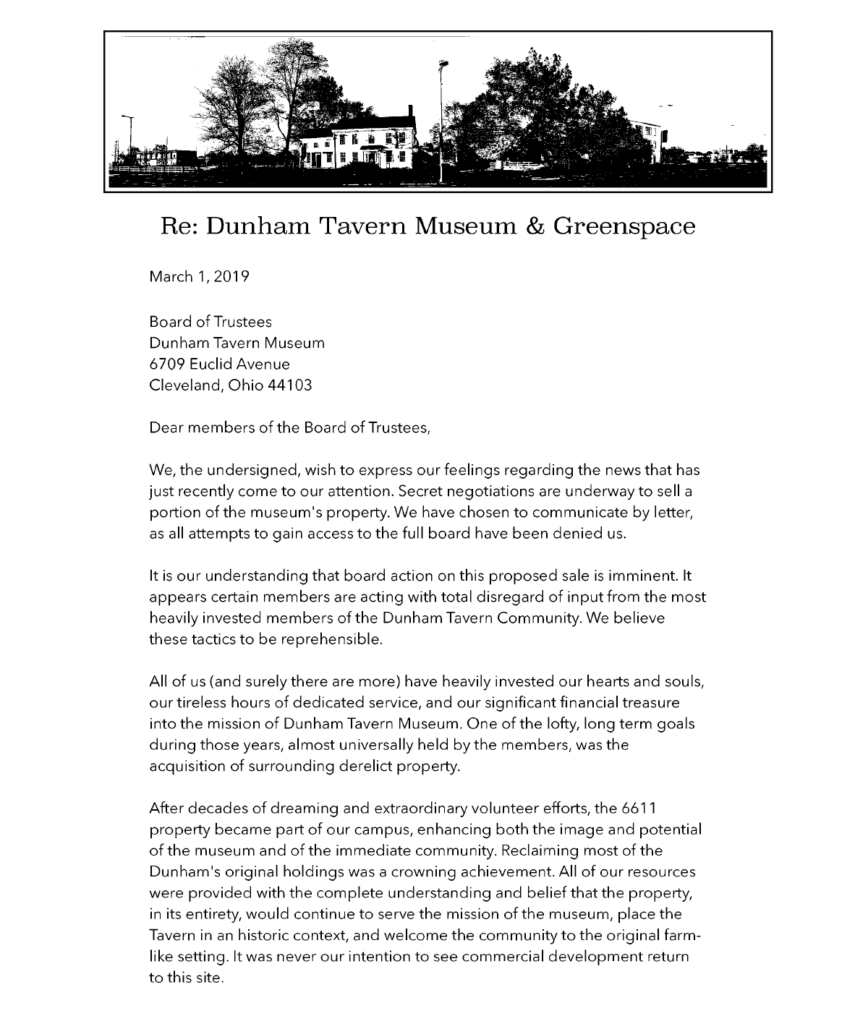 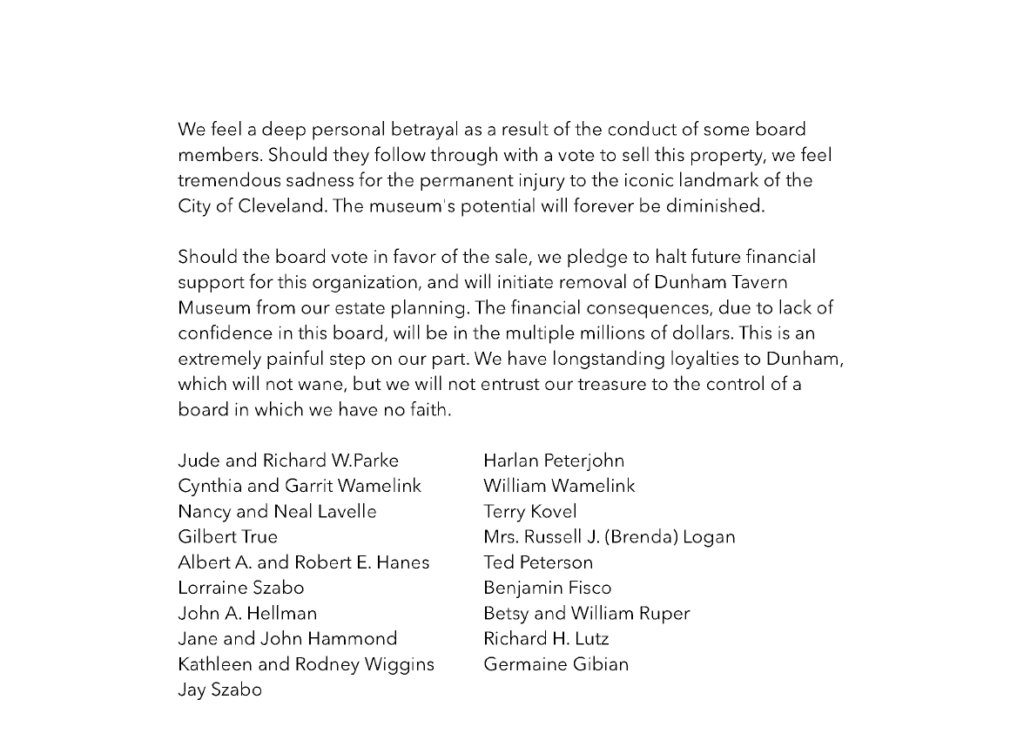 This letter—which confirms that the Dunham Tavern hardly lacked the financial ability to develop the greenspace as promised—was attached to the Complaint filed in our lawsuit on behalf of the DTM trustees and members seeking to save the greenspace, and has been widely reported on, including in a report at Cleveland Scene only three weeks ago. So there is no excuse for Litt having ignored it.

There is similarly no excuse for Litt, as in his earlier reporting on this story, continuing to go out of his way to avoid the essential question: If the Cleveland Foundation and DTM trustees who are driving this illegal deal were as committed to revitalizing the surrounding neighborhood as they claim to be, why can’t they use the Cleveland Foundation’s enormous wherewithal to complete their project by using any of a number of undeveloped parcels nearby without encroaching on the historic DTM greenspace that was recently reclaimed for public use?

The continued inability of the Cleveland Foundation and its accomplices to answer this obvious question continues to strengthen the inference that the transaction has been driven to personally benefit, (1) the conflicted DTM board members, and the real-estate developers they do business with in their outside employment, and (2) the vanity of Cleveland Foundation CEO Ronn Richard, who takes an annual salary upwards of $650,000 to run this “non-profit” organization, and who has reportedly been intent on having his office look out on a historic farmscape since having visited the Kresge Foundation’s similarly developed property in Troy, Michigan.

Litt did, however, get one thing right in this story: That “the Cleveland Foundation is known best as the nation’s oldest community foundation and as the city’s biggest philanthropic heavyweight,” that “exerts enormous influence on public policy, and urban development, and on charitable giving by other organizations.”

Unfortunately, today’s story powerfully underscores the failure of Litt’s employers at Advance Ohio to acknowledge that when the world’s oldest “non-profit community foundation” has been wielding “enormous influence” in your city for more than 100 years while poverty and inequality continue to grow to historic proportions there, it’s long past time to start asking important questions about your city, as well as about the very concept of “non-profit community foundations.”

The Dunham Tavern was once a stop on the historic Buffalo Stage Road connecting Buffalo, New York, Detroit, Michigan, and Cleveland. Today, it is the oldest building still standing on its original site in Cleveland, a designated Cleveland Landmark listed on the National Register of Historic Places, and a museum campus designed in stark contrast to the cityscape that surrounds it, to offer a glimpse of history and insight into the lifestyles of early Ohio settlers and travelers.

Our firm remains proud to represent the DTM trustees and members who are fighting to uphold the organization’s bylaws and mission of historic preservation. Our lawsuit is currently pending on a memorandum in support of jurisdiction in the Supreme Court of Ohio, a copy of which is available here.