Earlier this week, Calta informed us that City Council never enacted an Ordinance approving Ms. Scalise’s representation, despite that such approval is required by the Beachwood Charter and Code of Ordinances. Calta also informed us that the City “does not have an engagement agreement with Scalise relating to this matter,” and that, for unexplained reasons, “Ms. Scalise agreed to take on this appointment at no cost.”

Thus, this morning, we served on Calta a demand pursuant to Ohio Revised Code Sections 733.56 and 733.59, that she immediately seek an injunction against or otherwise terminate Scalise’s unauthorized representation of the City, and notifying her that if she does not fulfill her obligation to do so as the City’s Law Director, Burkons will exercise his right under R.C. 733.59 to institute legal proceedings on behalf of the City to ensure the same. 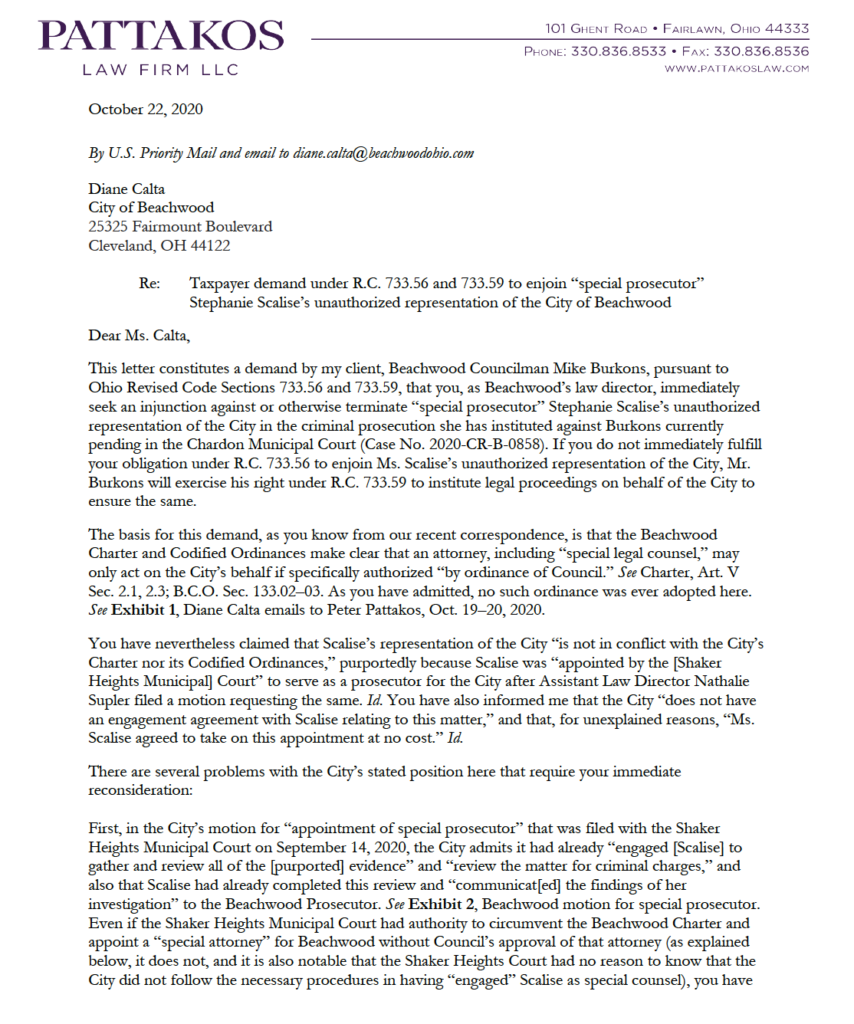 This demand letter, a full copy of which is available here, is based on Beachwood Charter and Code provisions confirming what should be obvious, especially under circumstances like those at issue here, where the Law Director and her chief Assistant Law Director, the City Prosecutor, have admitted conflicts of interest barring their representation of the City: That (1) it is Beachwood’s elected executive and legislative officers, who are directly accountable to the City’s taxpayers, that ultimately control the selection of which attorneys represent the City in court, and for what purposes, “special” or otherwise, and (2) the unelected and appointed Law Director, who, under the Charter and Code, serves “subject to the direction of the Mayor and Council,” and under the “supervision of Council,” does not have unchecked discretion to determine the same.

The letter also details the absurd factual circumstances surrounding Scalise’s unlawful representation of the City, and sets forth voluminous caselaw confirming that her prosecution of Burkons is contrary to bedrock principles of First Amendment jurisprudence and the most fundamental notions about how democracy is supposed to work.

And the letter further points out that the City’s Law Department seemed to clearly understand the Charter and Code requirements for the appointment of special counsel just last August, when Council considered and approved an ordinance to engage and pay special counsel to investigate alleged misconduct by the Mayor.

“It is puzzling, to say the least,” the letter states, “that when the determination was made, however dubiously, that ‘special counsel’ was needed to assess the legal implications of Burkons having sent the allegedly ‘criminal’ email at issue the City proceeded to retain ‘special counsel’ in such a wildly different and less transparent manner than it did in the [Mayor’s] case [last year]. There is plenty of reason to believe that if the City would have simply followed the Charter and Code to allow Council to consider whether it was necessary to properly retain and pay a ‘special’ attorney here, as it did in the [Mayor’s] case, much if not all of the mess discussed above would have been avoided. … [I] hope you agree that it is clearly in the best interests of all involved here, not least the citizens of Beachwood, that if Council does decide, upon due consideration, that ‘special counsel’ need be retained regarding this Burkons matter, that this ‘special counsel’ be someone other than Ms. Scalise so as to ensure that a properly appointed attorney provides an independent opinion as to this matter of increasingly profound public concern.”

For more information about this case, please see here and here and stay tuned to this page for further updates.