Yesterday, sculptor Billie Lawless reached a settlement in his lawsuit against Cleveland State University alleging the unlawful censorship of his sculpture, The Politician: A Toy, that CSU has displayed on its campus since 2008.

The sculpture, a forty-two-foot tall abstract figure with a motorized mouth that is continuously moving, is a criticism of the U.S. political process that is regularly updated with textual elements satirizing prominent U.S. politicians and commenting on current events.

The parties’ dispute arose last October, after Lawless updated the sculpture with the phrase “BUILD A WALL OF PUSSIE”—a simultaneous reference to President Donald Trump’s campaign-promise-turned-shutdown-ultimatum to build a wall along the southern border of the United States, and his infamous use of the phrase “Grab them by the pussy” in explaining to Access Hollywood in 2005 that he “can do anything” to women because he is “a star.” CSU had covered the Trump reference with a vinyl banner from a homecoming event, causing Lawless to file suit alleging breach of contract and violation of his rights under the First Amendment and the Visual Artists Rights Act. 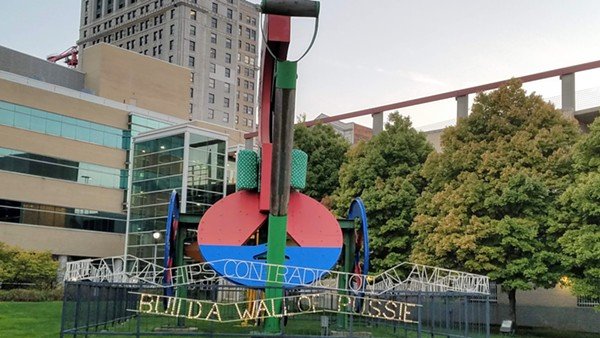 As part of the settlement, the banner covering the Trump reference was removed in early February, when the parties agreed on preliminary terms. Yesterday, the parties finalized the agreement, the primary terms of which require the University to pay Mr. Lawless $50,000, and Mr. Lawless, in turn, to move the sculpture to an alternative location by July 24, 2019.

Additionally, the parties have issued the following joint statement:

Cleveland State University and Billie Lawless thank each other for their 10-year relationship during which CSU displayed The Politician: A Toy on its campus. The parties have worked together to amicably resolve their recent dispute. The Sculpture will remain on CSU’s campus until mid-summer 2018. Any statements on the Sculpture are attributable only to the Artist, and do not represent the official position of the University. The parties wish each other well in all future endeavors.

Mr. Lawless was represented by attorneys Andrew Geronimo and Peter Pattakos of the Pattakos Law Firm in Fairlawn, Ohio. The lawsuit was filed in the U.S. District Court for the Northern District of Ohio, Case No. 1:19-cv-00178.